Today is the 237th anniversary of the Boston Tea Party. 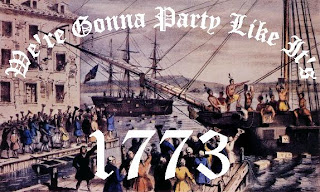 Thanks to NPR for reminding me.

But it's not really the 237th anniversary, because the "Boston Tea Party" didn't actually exist until the 1830s - the dumping of the tea into Boston harbor wasn't given that name until almost 60 years after it happened. In the 1830s, people in Boston (and elsewhere in the U.S.) were fighting over the meaning of the Revolution, debating whether American independence was the result of a popular uprising of working people or of an elite movement led by the people with names we know (Jefferson, Washington, Adams, and the like). As so often with history, the "tea party" became what it is because of its role in a contemporary political debate decades after the fact. Remember that next time a "tea partier" claims to be the real inheritor of the American Revolution and its so-called Founding Fathers - there is no "real" history, only stories of history told by people today.

[Everything I know about this topic comes from The Shoemaker and the Tea Party, a great book by historian Alfred Young. For a lengthier, more recent, fun and smart take on the political uses of history, especially the right wing's use of the Revolution, check out Jill Lepore's latest, The Whites of Their Eyes (how many books can the woman write?!).]
Posted by PastForwardPolitico at 9:08 PM

PastForwardPolitico
I still get a hard copy of the newspaper delivered to my front door every day and am hoping that the New York Times won't ever stop printing on paper. I love politics and I love history, and I think our political discourse suffers because we don't think enough about the historical contexts of our current debates. I'm working on a PhD in U.S. History while trying to figure out a way to make change in the real world. This blog is part of that effort. Email me at blog at pastforwardpolitics dot com.

View my complete profile
Follow me on Twitter @pastforwardpol.
Comments are always welcome - I'd love to know what you think about the issues I discuss on here.