Historian Robert Slayton has a column in the Times today about the anti-Catholic hysteria that Al Smith provoked when he ran for president in 1928 after four terms as NY governor. This is one of those pieces of history that, in my pessimistic moments, makes me think that we (as a society) haven't actually learned much from the past. It seems pretty clear to us now that it was, indeed, hysteria that caused people to think that, for instance, “if you vote for Al Smith you’re voting against Christ and you’ll all be damned,” or that Smith's election would mean that “you will not be allowed to have or read a Bible.” Shouldn't it be totally obvious to all Americans, then, that the election of a Muslim congressman would not result in sharia law (whatever the right wing means by that) usurping the U.S. Constitution?
Posted by PastForwardPolitico at 10:16 PM No comments:

Corporations and their shareholders. A study out yesterday from a group of U. Mass. economists says that major U.S. banks and corporations are in possession of $3.6 TRILLION in cash and other liquid assets, of which at least $1.4 TRILLION isn't necessary for their financial health and could instead be used to create 19 MILLION new jobs. They predict that if all of that money were actually spent on "productive investments and job creation" instead of remaining hoarded in the bank, the unemployment rate could fall below 5% by 2014.

So the next time you hear that raising taxes on rich people and corporations would hurt "job creators" by taking the cash they need to hire people, it's worth asking whether these corporations would even notice if a small bit of that $3.6 trillion left their pockets to help pay for needed government services. When you're swimming in the giant pool of money, you don't notice when the water drops an inch.

Also, check out this interesting take on why raising taxes would create jobs (hint: it's not because rich people would then willingly start paying more taxes).
Posted by PastForwardPolitico at 11:12 PM 1 comment:

Does Anybody in Washington Have Any Actual Ideas?

Instead of grading papers, I was procrastinating by browsing Twitter (obviously), which recommended that I check out @NRCC - the National Republican Congressional Committee. So I did, expecting to find something infuriating about the Republicans' positions - but I found something even worse: every single tweet is about Obama and the Dems. Do the Republicans have any actual ideas of their own? 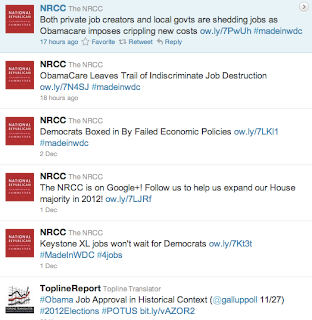 Then I headed over to the NRCC's website, and here's what I found: 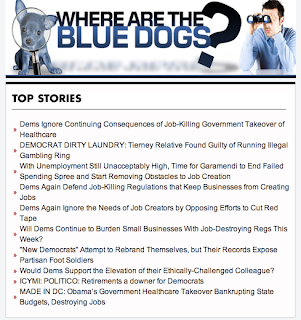 Keep in mind that these are the people in charge of shaping the Republicans' congressional campaign efforts and yet they seem unable to actually articulate something they stand for (although they're adept at finding things to oppose). Why is their lead banner about the Blue Dog Democrats, rather than about something the Republicans are actually doing?
But not to let the Democrats off too easy: for comparison, I checked out @DCCC, the Democratic Congressional Campaign Committee Twitter feed. Here it is: 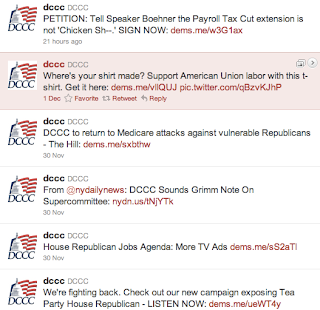 I guess from reading that we know that the DCCC is pro-union (really?) but otherwise it's much of the same: attack, attack, attack. And as for that labor thing - perhaps the DCCC just wants you to buy its merch? The DCCC website clearly shows, front and center, how to buy Dem merchandise (travel mug, anyone?*) and how to contribute money, but the most it has to say about what Dems actually support is this:

Supporting the DCCC is the single most effective step you can take to continue leading our country in a new direction. By fighting to retake the Democratic Majority in 2012 through protecting our Democratic members and electing new Democrats to Congress we can keep moving America forward.

And what does "moving America forward" mean, exactly?
Not to state the obvious, but perhaps we would end up with a more effective federal government if someone in either party came up with and advocated for actual ideas and policies, rather than just attacking the failures of the other side.
And so begins another day of righteous indignation at our politicians and political system.
*Incidentally, the Dem merchandising program looks a lot like JetBlue's loyalty rewards program:

Posted by PastForwardPolitico at 11:08 AM No comments:

PastForwardPolitico
I still get a hard copy of the newspaper delivered to my front door every day and am hoping that the New York Times won't ever stop printing on paper. I love politics and I love history, and I think our political discourse suffers because we don't think enough about the historical contexts of our current debates. I'm working on a PhD in U.S. History while trying to figure out a way to make change in the real world. This blog is part of that effort. Email me at blog at pastforwardpolitics dot com.

View my complete profile
Follow me on Twitter @pastforwardpol.
Comments are always welcome - I'd love to know what you think about the issues I discuss on here.